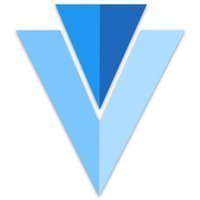 Vuetify is a component framework for Vue.js 2. It aims to provide clean, semantic and reusable components that make building your application a breeze. Vuetify utilizes Google's Material Design design pattern, taking cues from other popular frameworks such as Materialize.css, Material Design Lite, Semantic UI and Bootstrap 4.
Vuetify is a tool in the Front-End Frameworks category of a tech stack.
Vuetify is an open source tool with 32.1K GitHub stars and 5.8K GitHub forks. Here’s a link to Vuetify's open source repository on GitHub

Companies
118 companies reportedly use Vuetify in their tech stacks, including Barogo, FinTech Consortium, and Biting Bit.
Developers
745 developers on StackShare have stated that they use Vuetify.

Here are some stack decisions, common use cases and reviews by companies and developers who chose Vuetify in their tech stack.

I'm building most projects using: Server: either Fastify (all projects going forward) or ExpressJS on Node.js (existing, previously) on the server side, and Client app: either Vuetify (currently) or Quasar Framework (going forward) on Vue.js with vuex on Electron for the UI to deliver both web-based and desktop applications for multiple platforms.

The direct support for Android and iOS in Quasar Framework will make it my go-to client UI platform for any new client-side or web work. On the server, I'll probably use Fastly for all my server work, unless I get into Go more in the future.

Update: The mobile support in Quasar is not a sufficiently compelling reason to move me from Vuetify. I have decided to stick with Vuetify for a UI for Vue, as it is richer in components and enables a really great-looking professional result. For mobile platforms, I will just use Cordova to wrap the Vue+Vuetify app for mobile, and Electron to wrap it for desktop platforms.

The main reason we have chosen Vue.js over React and AngularJS is related to the following artifacts:

I'm migrating from pure Laravel with Bootstrap project to a kind of Laravel + Vue.js. Which one should I use for the UI?

We are considering bootstrap version 4. Still, which of these 3 should I choose? Pure bootstrap, Vuetify, or Bootstrap Vue?

We want to build an e/m-learning platform, so please guide us on choosing Quasar Framework or Vuetify? Our preferred tech stack is - Vue.js, GraphQL, Apollo. Which is best suited for the production-level UI framework?

What are some alternatives to Vuetify?
Bootstrap
Bootstrap is the most popular HTML, CSS, and JS framework for developing responsive, mobile first projects on the web.
Buefy
We like to think that Buefy is the javascript layer for your Bulma interface, since it doesn't require for it to be a sophisticated Single-Page Application. You can import it completely or single components on a ordinary webpage and use Vue.js as a replacement for jQuery.
Bulma
Bulma is a CSS framework based on Flexbox and built with Sass
Vuesax
Vuesax is a framework of components based on vue js, it is a framework that is designed from scratch to be incrementally adoptable. The framework is focused on facilitating the development of applications, improving the design of the same without removing the necessary functionality. we want all the components to be independent in colors, shapes and design for a freedom that we like all front-end but without losing the speed of creation and production.
Bootstrap Vue
Build responsive, mobile-first projects on the web using Vue.js and the world's most popular front-end CSS library — Bootstrap V4.
See all alternatives
Related Comparisons