Julia vs Scala: What are the differences?

What is Scala? A pure-bred object-oriented language that runs on the JVM. Scala is an acronym for “Scalable Language”. This means that Scala grows with you. You can play with it by typing one-line expressions and observing the results. But you can also rely on it for large mission critical systems, as many companies, including Twitter, LinkedIn, or Intel do. To some, Scala feels like a scripting language. Its syntax is concise and low ceremony; its types get out of the way because the compiler can infer them.

Julia and Scala can be primarily classified as "Languages" tools.

"Lisp-like Macros" is the primary reason why developers consider Julia over the competitors, whereas "Static typing" was stated as the key factor in picking Scala.

Twitter, Coursera, and 9GAG are some of the popular companies that use Scala, whereas Julia is used by inFeedo, Platform Project, and N26. Scala has a broader approval, being mentioned in 437 company stacks & 324 developers stacks; compared to Julia, which is listed in 5 company stacks and 5 developer stacks.

Finding the best server-side tool for building a personal information organizer that focuses on performance, simplicity, and scalability.

I've picked Node.js here but honestly it's a toss up between that and Go around this. It really depends on your background and skillset around "get something going fast" for one of these languages. Based on not knowing that I've suggested Node because it can be easier to prototype quickly and built right is performant enough. The scaffolding provided around Node.js services (Koa, Restify, NestJS) means you can get up and running pretty easily. It's important to note that the tooling surrounding this is good also, such as tracing, metrics et al (important when you're building production ready services).

You'll get more scalability and perf from go, but balancing them out I would say that you'll get pretty far with a well built Node.JS service (our entire site with over 1.5k requests/m scales easily and holds it's own with 4 pods in production.

Without knowing the scale you are building for and the systems you are using around it it's hard to say for certain this is the right route.

I am working in the domain of big data and machine learning. I am helping companies with bringing their machine learning models to the production. In many projects there is a tendency to port Python, PySpark code to Scala and Scala Spark.

This yields to longer time to market and a lot of mistakes due to necessity to understand and re-write the code. Also many libraries/apis that data scientists/machine learning practitioners use are not available in jvm ecosystem.

Simply, refactoring (if necessary) and organising the code of the data scientists by following best practices of software development is less error prone and faster comparing to re-write in Scala.

Pipeline orchestration tools such as Luigi/Airflow is python native and fits well to this picture.

I have heard some arguments against Python such as, it is slow, or it is hard to maintain due to its dynamically typed language. However cost/benefit of time consumed porting python code to java/scala alone would be enough as a counter-argument. ML pipelines rarerly contains a lot of code (if that is not the case, such as complex domain and significant amount of code, then scala would be a better fit).

In terms of performance, I did not see any issues with Python. It is not the fastest runtime around but ML applications are rarely time-critical (majority of them is batch based).

I still prefer Scala for developing APIs and for applications where the domain contains complex logic. 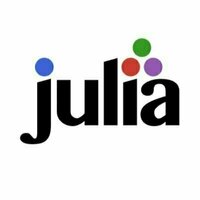 After writing a project in Julia we decided to stick with Kotlin. Julia is a nice language and has superb REPL support, but poor tooling and the lack of reproducibility of the program runs makes it too expensive to work with. Kotlin on the other hand now has nice Jupyter support, which mostly covers REPL requirements.

We needed to incorporate Big Data Framework for data stream analysis, specifically Apache Spark / Apache Storm. The three options of languages were most suitable for the job - Python, Java, Scala.

The winner was Python for the top of the class, high-performance data analysis libraries (NumPy, Pandas) written in C, quick learning curve, quick prototyping allowance, and a great connection with other future tools for machine learning as Tensorflow.

The whole code was shorter & more readable which made it easier to develop and maintain.

Cons of Julia
Cons of Scala

What companies use Julia?

What companies use Scala?

See which teams inside your own company are using Julia or Scala.
Sign up for StackShare EnterpriseLearn More

What tools integrate with Julia?

What tools integrate with Scala?

What are some alternatives to Julia and Scala?
Python
Python is a general purpose programming language created by Guido Van Rossum. Python is most praised for its elegant syntax and readable code, if you are just beginning your programming career python suits you best.
R Language
R provides a wide variety of statistical (linear and nonlinear modelling, classical statistical tests, time-series analysis, classification, clustering, ...) and graphical techniques, and is highly extensible.
MATLAB
Using MATLAB, you can analyze data, develop algorithms, and create models and applications. The language, tools, and built-in math functions enable you to explore multiple approaches and reach a solution faster than with spreadsheets or traditional programming languages, such as C/C++ or Java.
Rust
Rust is a systems programming language that combines strong compile-time correctness guarantees with fast performance. It improves upon the ideas of other systems languages like C++ by providing guaranteed memory safety (no crashes, no data races) and complete control over the lifecycle of memory.
Golang
Go is expressive, concise, clean, and efficient. Its concurrency mechanisms make it easy to write programs that get the most out of multicore and networked machines, while its novel type system enables flexible and modular program construction. Go compiles quickly to machine code yet has the convenience of garbage collection and the power of run-time reflection. It's a fast, statically typed, compiled language that feels like a dynamically typed, interpreted language.
See all alternatives
See all the technologies you’re using across your company.
Sign up for StackShare EnterpriseLearn More