Jekyll or Hugo — Help me decide

Generally speaking, Hugo builds sites much faster than Jekyll. In this benchmark, Jekyll took 187.15s to build a 10,000 page site that Hugo built in 2.95s. Hugo is written in Go and one of its chief goals is to stay extremely fast. Jekyll is written in Ruby, and while its plugin system makes it very extensible, it can’t keep up with generators like Hugo. 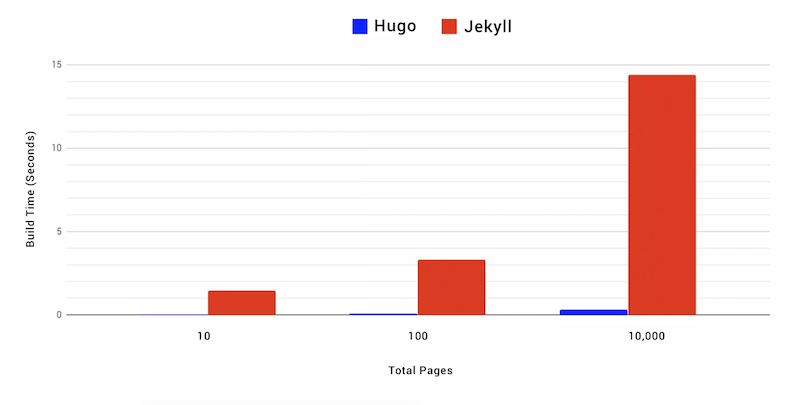 Should build speed matter that much to you? It depends. If you’re building a small site with a few dozen pages that you’ll only edit from time to time, probably not. But if you’re creating an active site whose content will grow and grow over time, choosing a static site generator (SSG) with a faster build speed will make both your development environment and your build pipeline more pleasant to work with.

Jekyll is extensible via plugins written in Ruby and boasts a large ecosystem of them—see awesome-jekyll-plugins. These do anything from creating XML sitemaps and RSS feeds to adding analytics and comments. Hugo does not have plugins but does have built in features to handle those things plus shortcodes to perform common tasks like embedding Youtube videos. You can create your own shortcodes too. These are not, however, nearly as flexible as Jekyll plugins.

If your source content fits into Hugo’s (very flexible) content model, you can probably get by with a combination of Hugo’s shortcodes and partials. But if your source content looks nothing like what the end result will be, you might hit a wall with Hugo. Some very advanced Jekyll sites transform source content several times before it gets rendered to HTML, content that may not even live in the filesystem but is fetched on the fly by a plugin. If that sounds more like your project, definitely verify that whatever SSG you consider lets you achieve that level of customization, especially with Hugo. That said, there is a way to fetch external content from REST APIs with Hugo.

Jekyll is blog-aware, meaning that it has built-in features that help you make a full-featured blog faster, such as drafts, permalinks, categories and posts. Put another way, Jekyll wants you to have a blog (one blog, really). As you read the docs, you’ll see a lot of references to that—blog post-like content must live in a _posts folder, for example. In Jekyll-land, there are pages and posts, the difference being that pages don’t have dates. This is a bit more like a traditional CMS like WordPress. The upside of this is a lower learning curve, as it’s pretty clear where things go, and if you are writing a blog you have less decisions to make. The downside is that you might feel constrained down the road if you want to add brand new sections to your site.

Hugo is another story. Hugo lets you decide where your content goes, all of it. What’s a page? What’s a post? You decide! Grab a cup of coffee and read the Content Organization page in the Hugo docs to get the full scoop, and don’t feel bad if you don’t get it the first time around. This makes Hugo extremely powerful—you can have completely separate blogs and other list-like content sections with entirely different layouts and configurations running on the same site. You can output content in formats other than HTML, even JSON. The only thing to watch out for is the learning curve. If it’s your first time with Hugo, you might want to build a few throwaway Hugo sites first before you start drawing up the grand plans for your real project.

Both Jekyll and Hugo have the concept of themes. Themes are like website templates but structured in a way that the underlying static site generator understands. Using a theme can greatly reduce the amount of HTML, CSS and JavaScript you need to write for a new site. There are tons of Jekyll themes out there, this is just one of many sites that collect them. There are comparatively less Hugo themes but many of them are linked to directly from Hugo’s themes site, making them easier to find and giving you a guarantee that they passed some basic criteria in order to be listed. Both Hugo and Jekyll support overriding pieces of themes, but Hugo’s more advanced template lookup order means that you can often do it with more precision. 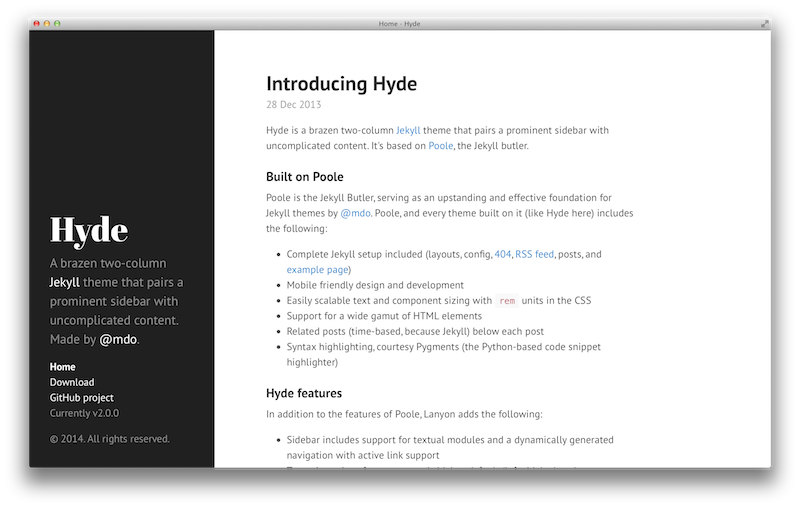 Hyde is a popular theme for Jekyll 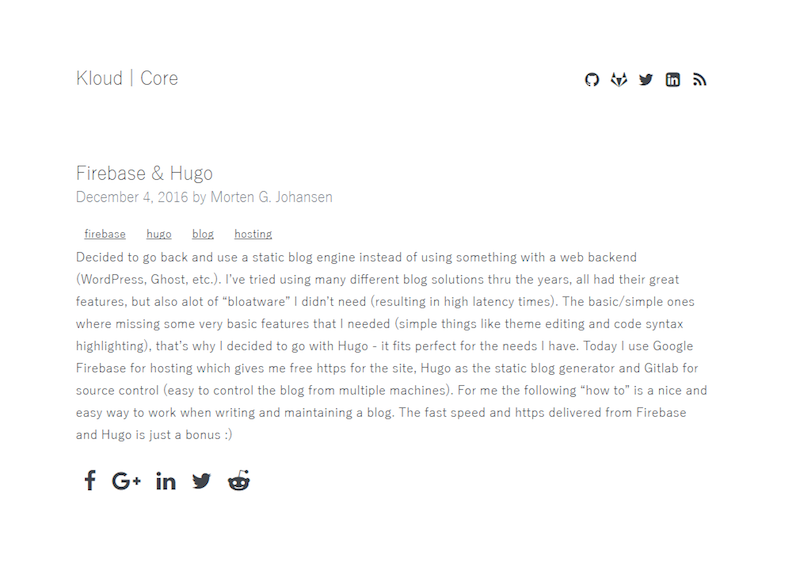 Hucore is a minimal theme for Hugo based on Hemingway2

Here are some other topics worth exploring as you make your decisions:

Hugo vs Jekyll: What are the differences?

Developers describe Hugo as "A Fast and Flexible Static Site Generator built with love by spf13 in GoLang". Hugo is a static site generator written in Go. It is optimized for speed, easy use and configurability. Hugo takes a directory with content and templates and renders them into a full html website. Hugo makes use of markdown files with front matter for meta data. On the other hand, Jekyll is detailed as "Blog-aware, static site generator in Ruby". Think of Jekyll as a file-based CMS, without all the complexity. Jekyll takes your content, renders Markdown and Liquid templates, and spits out a complete, static website ready to be served by Apache, Nginx or another web server. Jekyll is the engine behind GitHub Pages, which you can use to host sites right from your GitHub repositories.

Hugo and Jekyll belong to "Static Site Generators" category of the tech stack.

Some of the features offered by Hugo are:

On the other hand, Jekyll provides the following key features:

"Lightning fast" is the top reason why over 35 developers like Hugo, while over 65 developers mention "Github pages integration" as the leading cause for choosing Jekyll.

According to the StackShare community, Jekyll has a broader approval, being mentioned in 110 company stacks & 123 developers stacks; compared to Hugo, which is listed in 36 company stacks and 60 developer stacks. 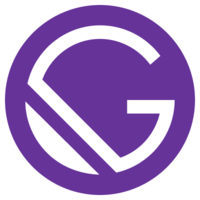 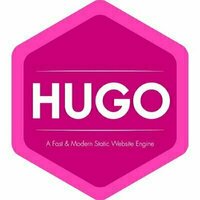 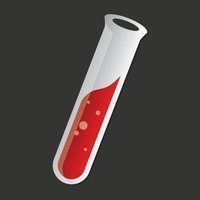 As a Frontend Developer I wanted something simple to generate static websites with technology I am familiar with. GatsbyJS was in the stack I am familiar with, does not need any other languages / package managers and allows quick content deployment in pure HTML or Markdown (what you prefer for a project). It also does not require you to understand a theming engine if you need a custom design.

See more
Get Advice from developers at your company using StackShare Enterprise. Sign up for StackShare Enterprise.
Learn More
What are some alternatives to Hugo and Jekyll?
Hexo
Hexo is a fast, simple and powerful blog framework. It parses your posts with Markdown or other render engine and generates static files with the beautiful theme. All of these just take seconds.
WordPress
The core software is built by hundreds of community volunteers, and when you’re ready for more there are thousands of plugins and themes available to transform your site into almost anything you can imagine. Over 60 million people have chosen WordPress to power the place on the web they call “home” — we’d love you to join the family.
MkDocs
It builds completely static HTML sites that you can host on GitHub pages, Amazon S3, or anywhere else you choose. There's a stack of good looking themes available. The built-in dev-server allows you to preview your documentation as you're writing it. It will even auto-reload and refresh your browser whenever you save your changes.
Pelican
Pelican is a static site generator that supports Markdown and reST syntax. Write your weblog entries directly with your editor of choice (vim!) in reStructuredText or Markdown.
Gatsby
Gatsby lets you build blazing fast sites with your data, whatever the source. Liberate your sites from legacy CMSs and fly into the future.
See all alternatives
See all the technologies you’re using across your company.
Sign up for StackShare EnterpriseLearn More